Cancel
The most common feature on a pair of Oakley glasses is the Icon. Starting in 1994 with the release of the Eye Jacket, and later with the conversion of M Frames and Zero's, the Icon logo was placed on almost every pair of glasses. Prior to this revision, ear stems typically had the full Oakley logo in either the Thermonuclear/Classic font, or the thin stretch variant.

In 2004, just prior to Oakley's 30th anniversary, they brought back the full company name on the ear stems for a few select models. Two logo styles were used, despite one being the more prominent representation of the lineup. This new logo was a variant on the Thinstretch font, but with more weight to it, and was dubbed the Heavy Stretch logo.

To market this collection and give it a unique look beyond a simple logo change, Oakley provided exclusive display towers and boxes that would be tightly linked to these frames. The towers were fashioned in a dark coating, and a weathered Heavystretch logo was displayed prominently on top. Boxes came in a vibrant red design, with the new logo criss-crossing into what was known as the splatter stretch design. This weaving of logos did leak into some of the promotional videos of the time, even when not being used specifically for the Stretchline releases. In addition to the red boxes, red microbags were also included. Early releases had the standard black tags sewn on, but later on moved to their own Stretchline tags.

Distribution of this new line was granted exclusively to Ski and Surf shops. Previously it had been common for OPD's or Oakley Premium Dealers, to have certain exclusives, but it was typically unusual to limit distribution of entire models. The Stretchline collection started off in 2004 with two models, the Fatcat and Warden. The Fatcat was a smaller version of the Monster Dog, but with a bulkier frame. The Warden was Oakley's first attempt at an Aviator frame, and in fact its working name was Aviata.

The Warden initially came with hammer stems, similar to the Romeo and X-Metal XX, and the lenses were the largest of the wire models at that point. It came in several colorways including Olive, Pink Camo, Polished Black, Polished Gold, and Silver. Lenses were primarily traditional tints, except for Violet in the Pink Camo frame. Three athlete exclusives were created in contrasting color schemes in order to accent the Heavystretch logo. The first was all White with Black accents, another with Black with Pink accents, and finally a Black with Green accents.

Fatcats also came in very traditional options, but like the Warden, there was one that stood out. In addition to the faded clear 'Whiskey' option, a white-ish Cream, and the usual Tortoise/Polished/ and Matte Black colors, they also came in a vibrant Blue Camo. Many stores did not carry this colorway for fear of not selling it, which caused the frame to become initially hard to find. However they did show up at Vaults later on and in larger quantities. Lens options were very standard, with only Grey and Bronze variants. A single Polarized lens was offered on the Polished Black frame, and differed from the other Black option by having a bright white stem logo. The whiskey frame, along with Brown and Black Fade on other models, was prone to peeling, and with some warm water, the entire frame could be cleared, providing the opportunity for unique customizations.
Next Page
posted by Dann
1/2

Oak
Twenty Fifty
Awesome stuff. While many of the old hardcore fans may despise Stretchline for what it is, the Warden and Fatcat really are iconic products in Oakley history given how far the Square O line has progressed. Looking forward to seeing the video.

Dann
Dann Thombs
I love the heck out of Stretchline. Next to vintage and Splice, they have a huge representation in my collection. Like you said, Square O gobbled them up, but it was such a sweet spot in Oakley's history, and sort of the final era before people got a bit fed up.

As for the Warden, I have a Pink Camo one which was a prototype. This one has Black Iridium lenses, which never officially appeared on the Warden actually. Maybe you can do something with it...

Oh, and if someone stumbles across some Grape Juice Twitches, let me know. I need a pair of those :)

I've often wondered if the two camo monster dogs felt under the stretchline category. At the time they were released, my OPD tried to get them for me for weeks, not to say months, but Oakley rep kept telling him they were reserved for "hardcore shops" like ski and surf shops. So I they were treated like Stretchline models, but not part of the line I presume.

By the way, I can remind that the whole Stretch line was grouped on a side part of the main website. While the main website was all black design, the "stretchline" category could be found by adding /surf to the URL and the design was more "surf" with blue white template colors.

Dann
Dann Thombs
Cool bit of trivia. I'll see if I can work that in.

Dann
Dann Thombs
There were the two neon Wardens too

Oak
Twenty Fifty
And a white framed one with black logo and black iridium lenses.

Dann
Dann Thombs
Have any pictures.

Oak
Twenty Fifty
I'll try to take a pic of mine next week sometime. I had a pic loaded years ago but I think I lost it in three corrupt hard drives ago.

Dann
Dann Thombs
Cool, thanks. I should have known you would have just flat out owned one.

oogie
paul mcj
Was going to mention those neon wardens as well. Always had a fancy for those - guess I was just never willing to step up and snag on.

monster_beetle
Jules Neefjes
Neon Wardens, sounds pretty awesome. Anyone got some some pics? 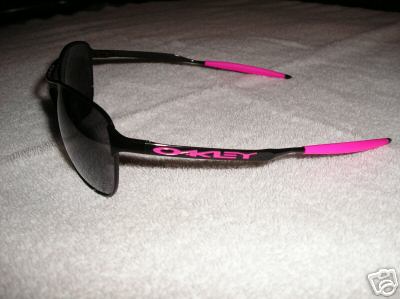 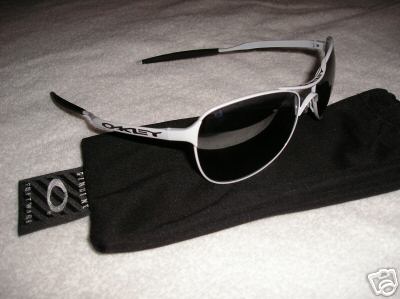 Oak
Twenty Fifty
That's the white Warden I have. I'll skip out on taking a picture of mine unless someone requests otherwise.

Dann
Dann Thombs
A higher res one for the video would be good though, if you can. Once the photobucket version above is stretched to 720p, it will look terrible.

Dann
Dann Thombs
Script is done more or less, let me know if anything is outstanding, as I'd like to record soon. And by soon, I mean this year if all goes well.

Here's another cool one. It's a factory polished clear Fatcat (not a Whiskey frame that was cleared). There also exists one that's matte clear...that one's super cool.

Two athlete exclusives were created in contrasting color schemes in order to accent the HeavyStretch logo. The first was all White with Black accents, and the second was Black with Pink accents.


There were actually three. The third one was a black frame with neon green script logos and green earsocks. Black Iridium lenses like the others.

Dann
Dann Thombs
Ah right, thought there was another neon.

monster_beetle
Jules Neefjes
Now I see the pics. I indeed know them. I thought you meant a neon colored frame actually. Pretty cool to be remembered of those though :)

B3
Bob Russell
I remember Nick Salazar (Airborne) was big into the one-off Crosshairs/Wardens and had some great photos of them, but his collection page is blank now. Maybe the photos still lie in the threads somewhere. Oak, beam up your super search powers!

Oak
Twenty Fifty
He took them all down. I suppose you can ask him for the pics of the Yellow and Red Crosshair. His Flickr and pictures here:

He runs this site:

Another year went by, and two more models were released into the Stretchline collection. These models were essentially the same, with only height being the main difference. The Twitch and Eye Patch had jagged ear stems, and boxy flat orbitals, firmly placing them in the lifestyle category.

I think based curve was a big difference as well. I think EP was 8.75 while Twitch was 6-base. Someone can verify for me (momma Oak commandeered my Twitch, so don't have it on hand to compare).

Racer96
Got His Icon !
I have his old red crosshairs.

I wish I had picked up the black/green neon wardens. Heck, the pink ones would have been nice too.

ooSnip3r
So the Oakley text that’s on the old school riveted aluminum cabinets. That’s called stretchline ? That text and the Factory Pilot text are my favourite.
1/2