4Y
Regular Badman vs AF Badman
May 31, 2015 7:48 PM
I made a mistake getting an AF Badman thinking its just the nose piece difference from my GF Badman. I ended up returning the AF because of disappointment.

Side by side says it all (courtesy of Joe)
Sitting on a flat surface, the GF is further away from the camera while the AF is closer to the cam. 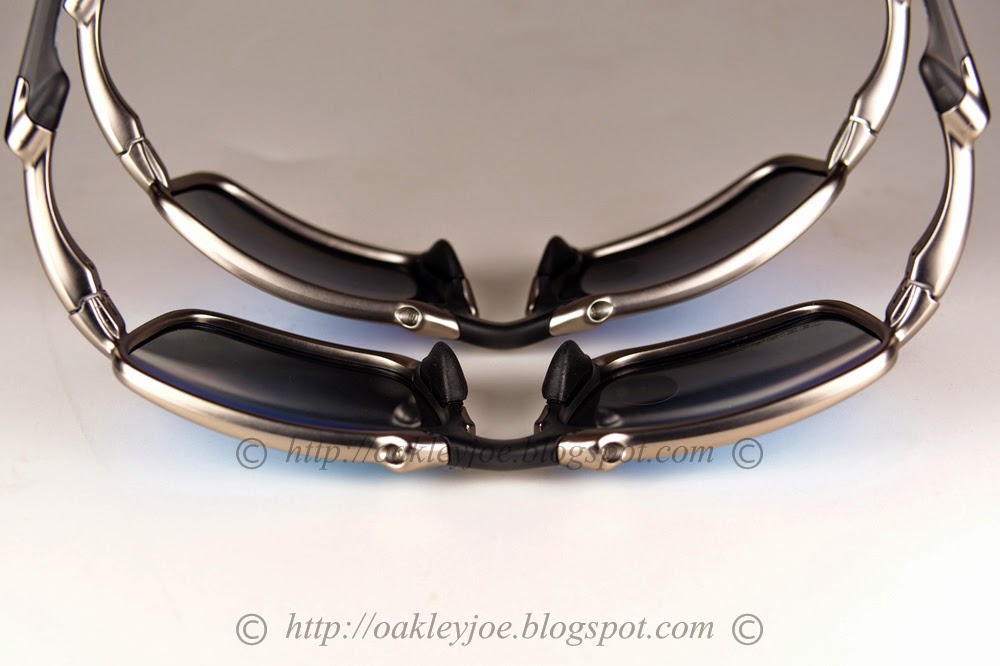 AF on top with a smaller/squarer lens: 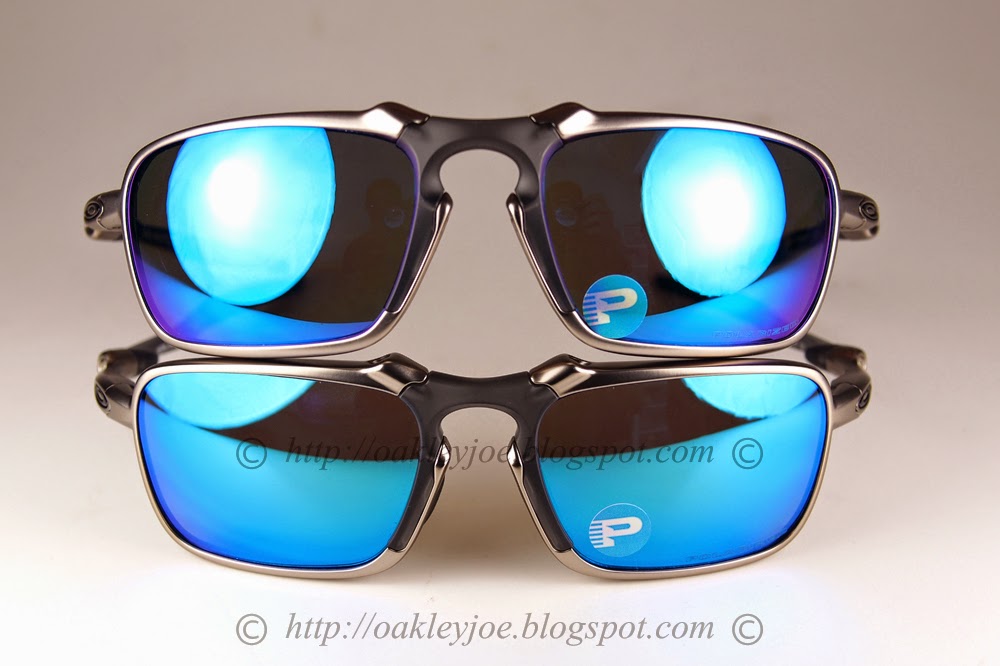 5Y
revisiting the replica Time Bomb II
Feb 6, 2015 3:31 AM
To piggy back to the Pit Boss replica thread, I got into the mood of revisiting the TB2 replicas.

I know there have been previous threads about the fake TB2 but I just wanted to point out a few things that I had noticed recently. Also, I think most of the differences between a real vs. a fake one pointed out couple of years ago were never really that obvious to me.

So here are a few pictures that I have gathered around the web to show you how the replicas were being shipped and packed and also, I have pinpointed some obvious differences between a real vs. a fake.

Package looks like it was shipped from China with EMS as an Asian courier Service: 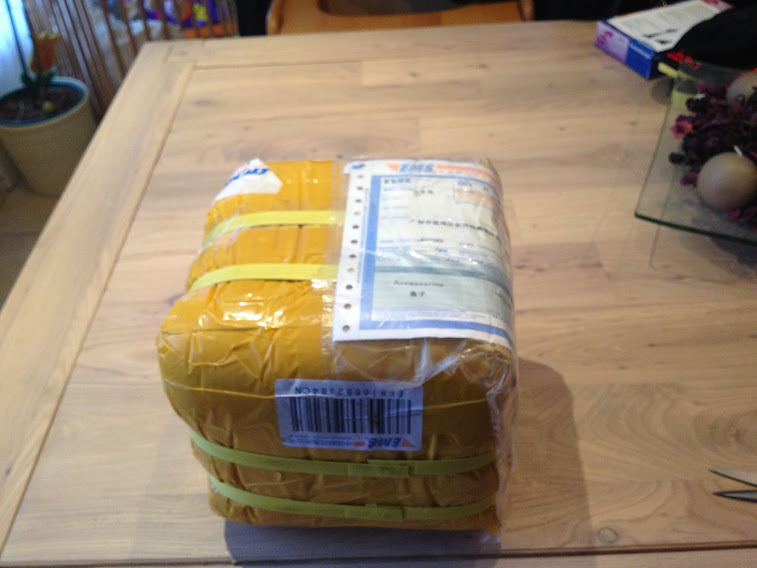 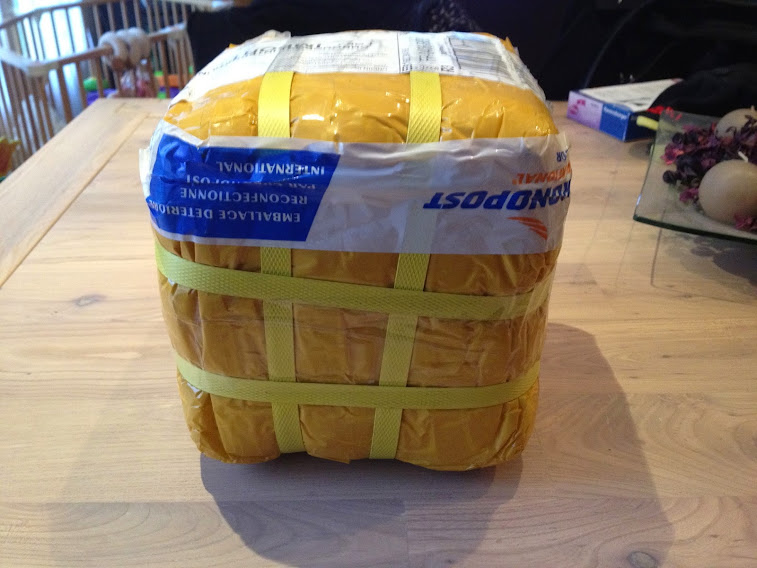 Not your typical TB box: 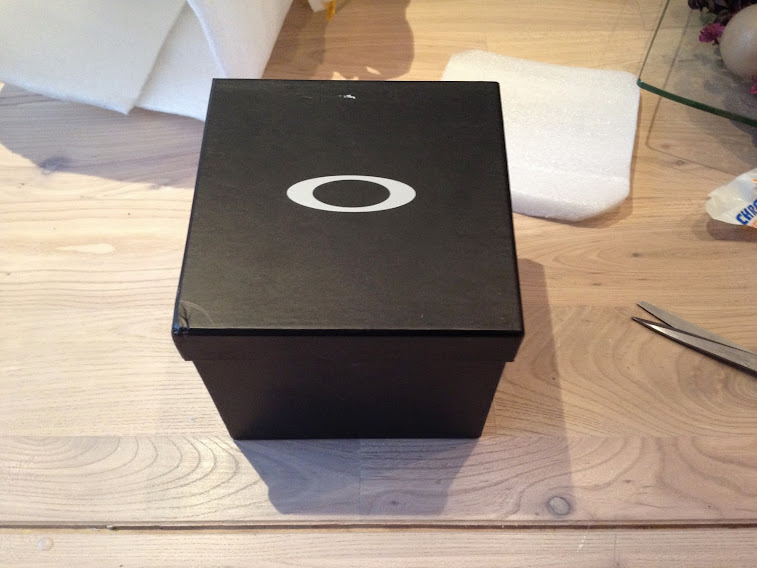 Whoa, the coin came off during shipment! In the mean time, I couldn't pry this coin out from a legitimate Oakley box. 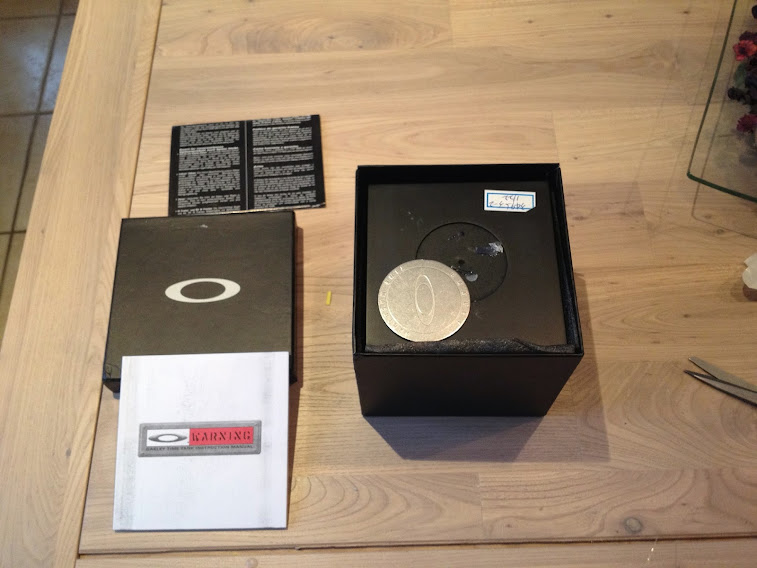 Okay, there it is but it is missing the awesome Blu-ray disc- oh lord! 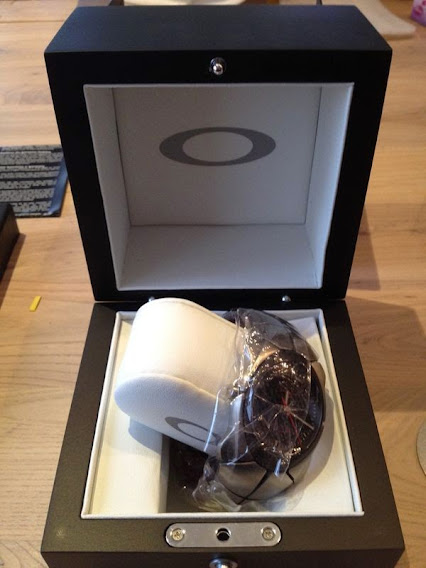 Something looks really funny here- Do you see it? 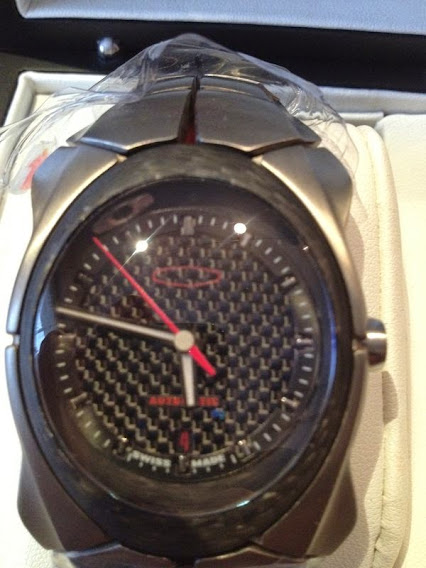 No biggie apparently, superglue will fix it! 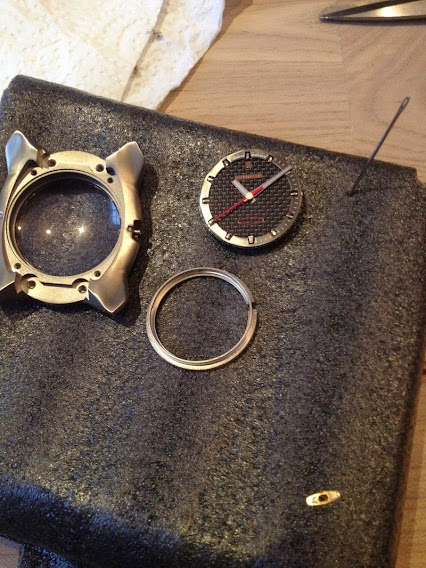 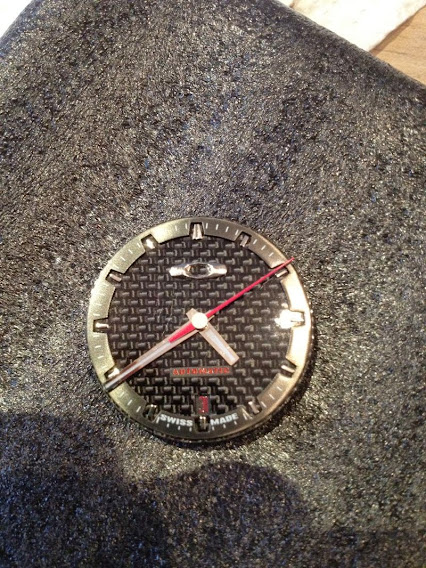 I still haven't really figured out the fascia differences between a real vs. fake one...at least from pictures on the web. 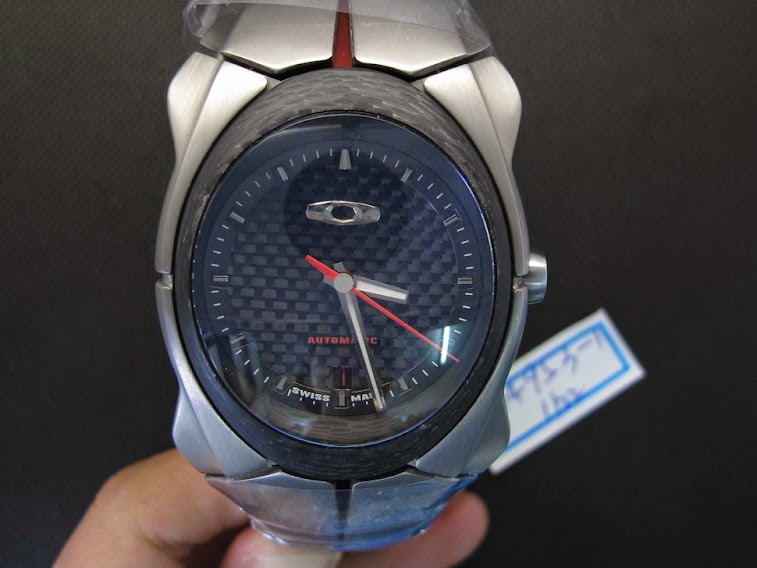 Honestly, it looks real to me! 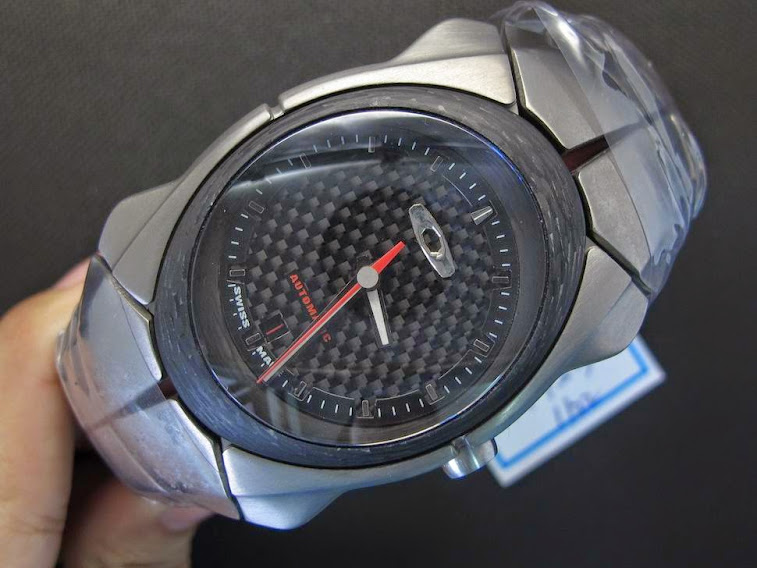 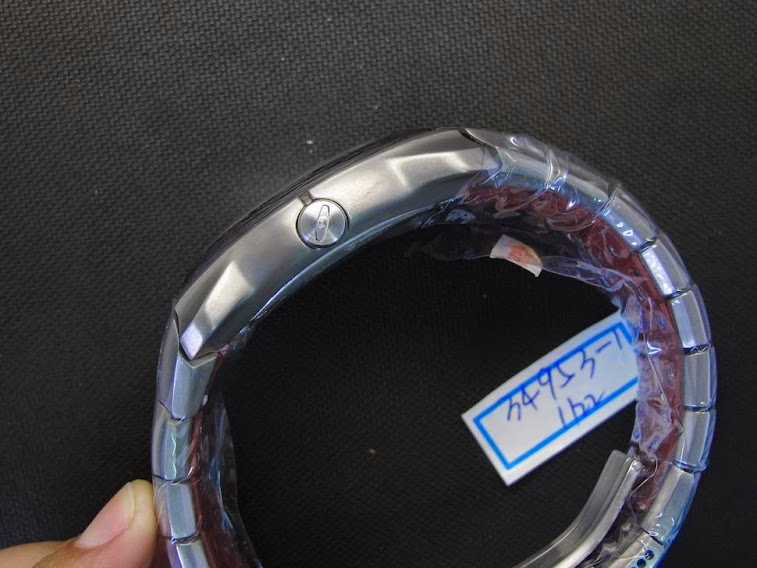 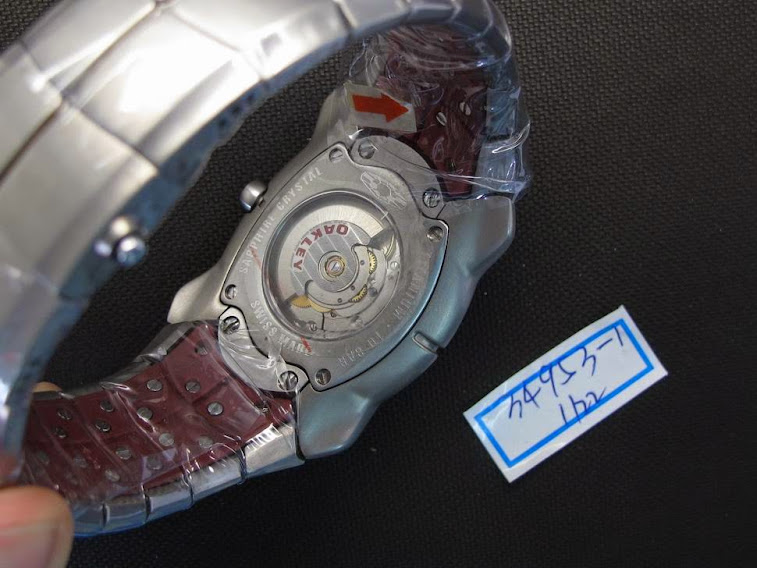 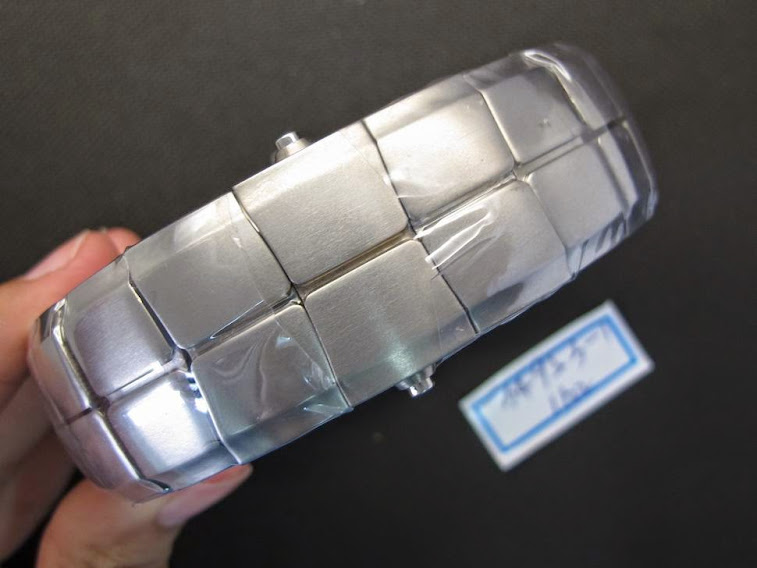 Now, here is a comparison at the back: 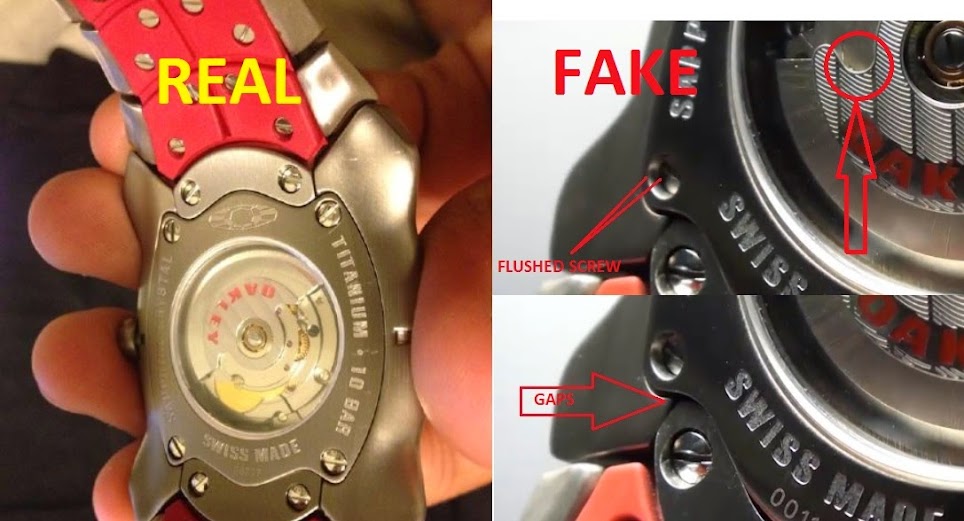 - look carefully at the lobe of the oscillating weight wheel!

The 4 screws that holds the plate are flat-head, the real TB2 uses rounded/oval: 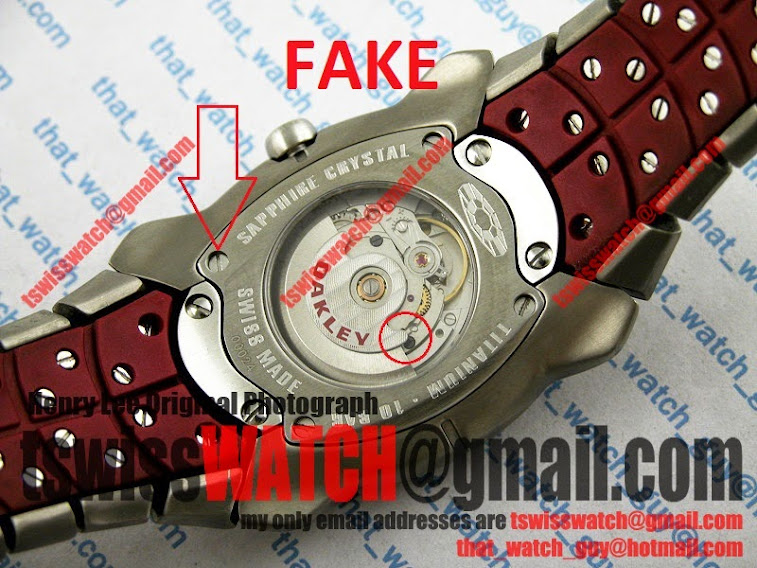 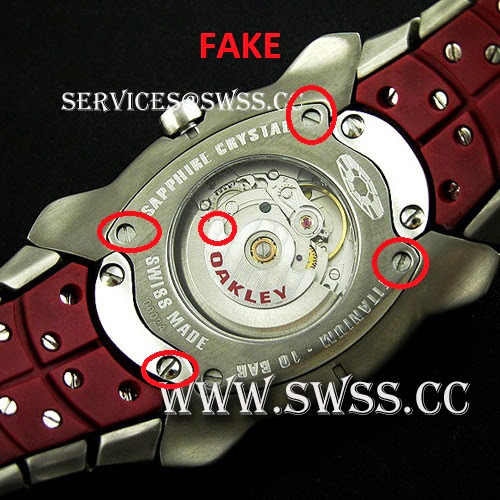 A quick look at the real one: 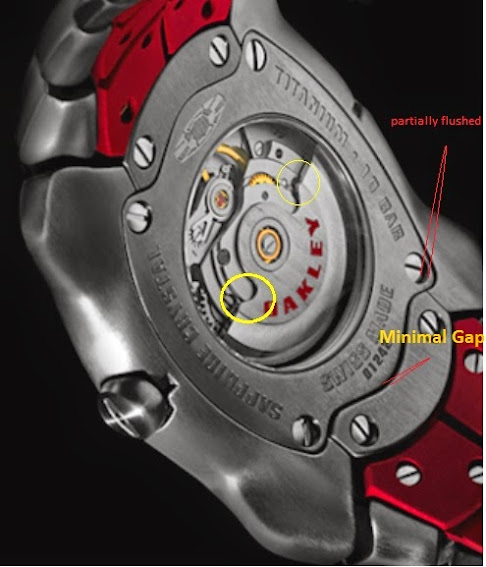 Chipping of the fake Carbon Fiber:

BTW, real CF conducts electricity so grab your multimeter and check for continuity.

The Elite Icon is slightly thicker on top: 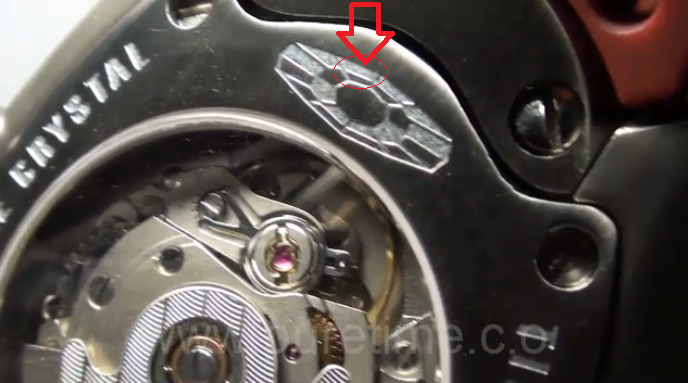 Thanks for looking, you have been warned! The painted body is subdued and does not scream Oakley. Overall, it is acceptable as it is a little blend of the legacy aluminum and the 3.0. The lack of rivets is nothing new but exposing the hex heads seems to do the trick. The LED lighting above and the unknown lighting at the bottom seems to spit out a lot more lighting than the previous models. These binding post located all over inside seems to be a receptacle for additional lighting but I really do not know what it is for.
Also, the shelves are non-adjustable.

5Y
O without the LOGO
Jul 18, 2014 9:25 PM
I am trying to found out how many Oakley products were produced but didn't come with any type of Oakley logo, skulls, nomenclature or intake ports.

1)X-Metal Penny- we all know about this but why no logo?
2)Kevlar torpedo case
3)Kevlar box- similar to the ballistic box in size but no logo
4)Rectangular Plexi stands -display piece not really made by Oakley
5)Razrwire -without the bluetooth
6)1st Gen Over the Top?? - it screams O so does it need one?

6Y
10th Anniversary
May 19, 2014 7:48 PM
I have to say that when I first discovered this site, it was like the best thing ever! I was on it 50-60% of the time at work and 40-70% of my time at home. I really enjoyed meeting fellow Oakley collectors that I wasn't really sure if they really existed but I am sure they were around because somebody was outbidding me on eBay! I sacrificed sleep a lot for the pure passion of being in this site enjoying Oakley. I wholeheartedly want to thank Dann once again for creating this site and for the fellow members who made this place an O-sanctuary. This site truly proved that I wasn't crazy and wasn't the only one collecting catalogs back in the early days(Phil and Lake. Although I haven't been here much, O-review has definitely carved a place in my heart permanently...ooh that's deep! Happy 10th Anniversary!!!

6Y
Frame Elimination Game
Sep 13, 2013 8:35 PM
SAE 10W40 motor oil, such a brilliant idea for a frame color. And Oakley got it right on the MDs! The frame looks like its made of a congealed then cured oil. Absolutely amazing frame...well at least for the monsterdogs. I can't say the same for the Fives or Tens. 10W40x2 of my votes...if permitted

6Y
Frame Elimination Game
Sep 12, 2013 8:40 AM
Never seen the wood grain in person, that's because I never paid attention to montefrios. I am sticking with Cobalt!

6Y
Your Hit List
Sep 2, 2013 6:04 PM
Fill it up with trophies! Especially the shelvings are very adjustable.

6Y
Vintage Collection For Sale
Aug 26, 2013 4:46 AM
I am glad you ended up keeping them. That's quite a list of outstanding vintage pieces. I don't really like the idea that someone with a lot of dough just comes in, buys them all in one shot and call themself a collector. But again, sometimes it's nice somebody will just buy it in one shot so you only have to deal with one. I myself managed to keep mine intact even during the hard times and am really glad I need. 6Y
Digital collecting
Aug 23, 2013 4:14 PM
Back in the 90s, I salivated when just looking at all the colorway combos available from the Eye Jacket and Trenchcoat line. In my mind, I would try to collect them all, but unfortunately, even if I had all the money in the world, it would be an insane to do. So Instead, I collected all the SunglassHut CATALOG I can get and be more normal, but the reality was I was as broke as a joke to buy more than one pair.

Today, I see massive collections, artistic set-ups, holy grails, masterpiece customs, limited Eds and factory one offs. So, like the yesteryears, I would salivate looking and would wish to have them all too. Obviously, it is impossible because money cannot buy everything. So my solution: a HD digital picture frame for less than $200. Then I'd go save every picture I like, transfer them over to the frame, run it in a slideshow mode then accompanied by various adrenalin themed music that plays in the background. Make sure this bad boy has the ability to play videos too so one can put various "Purpose beyond Reason" videos from YouTube as part of the video/audio/picture loop.

Anybody else into digital collecting?