They are super comfy I had to swap out the nosebomb that it came fitted with though.

8Y
Fall Refresh
Aug 28, 2013 6:01 PM
Wait, what? A revised Wiretap? When the hell was this announced...and why was my WireSense not tingling? Aside from X-Metals the Wiretap was one of my favourite aesthetic concept.

the worst thing about focussing on x-metals is the knowledge that my only sustainable purchases will probably line the pockets of future scalpers.

so badly need a pair of R1's with an x-metal finish, I have a pair in plasma but I would gladly trade them for an x-metal pair, its a more wallet friendly too lol

8Y
new releases
Jul 15, 2013 12:14 AM
Jeez you can tell I havent been in for a while, please tell me those half-mars are legit lol I need a new X-metal fix after hearing manufacture was being stopped


Houns, I am disappoint lol

and the modern day Welsh flag

10Y
Fuel Cell England on eyewear oultlet
Jan 19, 2012 3:11 AM
*sigh* I think I'm the only guy in Wales who would actually buy a pair with the Welsh flag, cant see Oakley making a run of them just for me lol

10Y
X-Metal Production Plant
Jan 15, 2012 6:26 PM
To be honest You have a very valid point Oak, I hardly ever notice people in Wales wearing X-Metals, I don't think its purely down to not having enough sunlight in the UK lol

I really think it's a case of luxury vs convenience. Compare the amount of Fords there are on the roads as opposed to Aston Martins, most people wouldn't have the inclination or the funding to justify the kind of spend required when you look at the higher end of ranges, I see plenty of of O-Matter and Wires but the X-Metal has never reached the saturation point you expect.

I suppose the way we get slammed with tax here in the UK has an even larger effect as well, normal RRP for a Juliet on the Oakley website in the UK is £300 ($459, over a $100 more than the Juliet costs in America). Most people simply won't part with that kind of money in the UK for something that's only convenient for a (comparatively) small portion of the year.

Being a massive X-Metal fan I have mixed feelings, the lack of others wearing X-Metal helps the exclusivity of what I wear but then there's the gut wrenching reality that no company will go to the expense of creating a top range product (which is more expensive to produce) when it feels there isn't enough of a market to sustain it.

Worse than all of this is that the day Oakley announces that no more X-Metals will be made will be the same day scalping scum on the internet like Amermscl and bmcaps see $ signs flash in front of their eyes. Like the Romeo and Penny, once their production ceases the prices are going to go haywire.

10Y
X-Metal Production Plant
Jan 15, 2012 4:46 PM
The focus has always been X-Metal for me, I said a few months ago in another thread that it seems to be the case that some people tend to focus more on a specific range as far as collecting goes because that seems to be the time they got into the O initially eg a lot of people who have been Oakleyphiles since the early days will focus more on Frogs Zeros and Mumbos and so on (this isn't always the case, aesthetics don't have a border).

I'm a relative newcomer to Oakley, I never paid that much attention until the mid to late 90's when the X-Metals were turning loads of heads so to me the X-Metals have embodied Oakley to me and caused me to look back through the back-catalogue as well, X-Metal IS Oakley, it's about pushing the envelope...going beyond what is expected...being unique and I hope Oakley will never stop representing all three values.

Jeremy Renner was spotted on set wearing a GC, so Hawkeye might be wearing some Oakleys in the move after all.

It would make sense, the costume from the movie looks to be modelled after the Ultimate version of Hawkeye and he wears a pair of very Penny-like glasses in that. With any luck they'll get more screen time that Cyclops' did in X3 :-)

On a negative note, if they do turn out to be a Ruby Pennny you know the scalpers will have a field day on eBay

10Y
Photos you may not have seen
Sep 1, 2011 2:42 AM
Is it just me or does Hawkeye appear to wearing ruby Pennys in the newest Avengers poster?

Maybe he dropped by Xaviers School and raided Cyclops' wardrobe :-)

Logan is only 7 but hes pretty much nailed the concept of the P.W. shot... 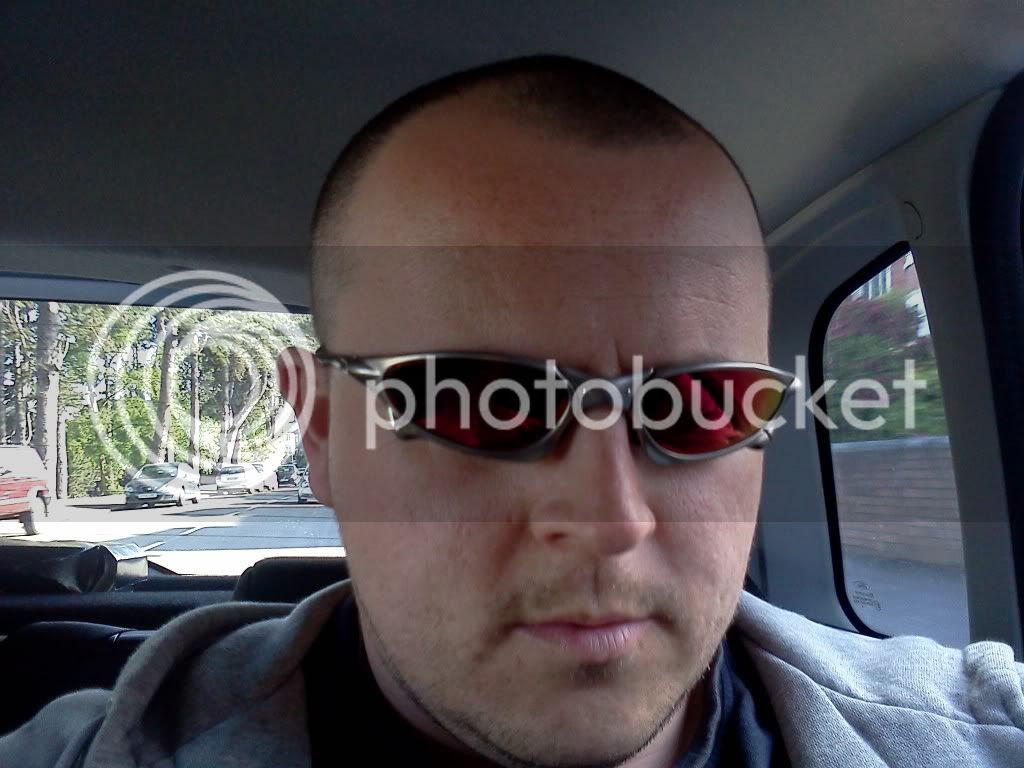 (come on, I've already converted 8 of my workmates to Oakley, we need a place of worship lol)

11Y
Happy 7th Anniversary!
May 18, 2011 4:05 AM
Props to everyone who keeps this site as awesome as it is! Dann and the mods especially but also it's participants. Never experienced anywhere else like this online, everyone here is dedicated to purpose beyond reason...'nuff said :-)

It looks pretty cool. I'm wondering one of two things: 1st, What it would go for on eBay. 2nd, how long it would take for someone to put a fake one on eBay.

HOLY CRUD!!! That is amazingly close to the "Juliet-001 prototype" I rendered two years ago...

11Y
Fakes on Ebay
May 4, 2011 2:17 AM
nah those Juliets are genuine, you can tell the fake x metals a mile off, the frames tend to be one piece and usually badly carved where the flex couplers should be, the box is there probably because he lost the original box or never had it, the Juliets are genuine enough.

edit: the fake mars that Tag put up is a good example

11Y
HELP! A gasket on my Romeo 1 broke!
Apr 14, 2011 12:42 AM
Any ideas how I can get them replaced! As they're discontinued I don't think Oakley will replace them and theres a money grabbing shylock trying to sell a set of unobtainium on eBayt for £70 (plus £21 P&P obviously because a pack of unobtainium is so heavy and bulky it needs its own seat on a plane lol).